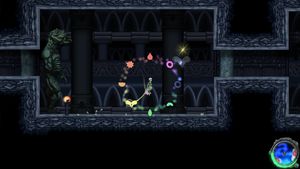 On entering the Energy Temple, you will encounter a Save Crystal. Follow the path and you will come to a room that will be blocked by a statue. The door will close behind you, this is the first boss type encounter in the game. The statue will emit a glowing symbol which you have to sing in order to proceed, it will be one of Naija's notes. On singing the note, energy bolts will spawn which you must avoid or use the shield song to block. As each note is sung, more energy bolts spawn, it is advisable as you near the end to just use the energy shield as there are too many to dodge.

When the glowing ball falters, the statue will sing the Energy Form Song:

You must sing these three notes to destroy the statue. The Statue will now collapse and you have a small cut scene in which you obtain the Energy Form. To enter energy form you just repeat the song that the statue sang. To shift back into normal form, press X, or left right click on Naija. You can also press 1 for normal form and 2 for energy form for quick changing.

Swim further along and you will get the chance to test out your new abilities. There is a save crystal room just off the first big chamber, use your mini map and map to guide you. Swim for this room if you are low on health and save, if you die you have to repeat the previous encounter. Practice with Naija's new abilities in the next few chambers.

Carrying on through the next chambers you will have to solve a puzzle. All you have to do is place to pearls into the slots to open the gate. The first pearl is held in the hand of a statue in the top right hand chamber (opposite the save crystal chamber) use the song of binding to pull it out and down to the slot. The last pearl is at the bottom of this cave section so you must go through and kill everything to drag the pearl back safely. There are a few new enemies here which you can easily dispatch in energy form. The energy beams are the only real obstacle in this section. Once you've returned both pearls, charge them up with your energy attack to open the gates.

Go through and there's another save crystal, use it. Now you have a boss encounter. The first thing to do is grab the pearl with the binding song and place it in the holder, for ease just keep yourself in a shield so you don't have to dodge the energy orbs. If you can't see the pearl, switch to energy form and shoot the boss a bit to push him backwards, you should see the cracked pearl on the floor, push him as far back he will go so you can safely pick up the pearl in normal form. Now switch to energy form, and start luring the boss to the pearl, you do this by swimming close to him, avoid his swipe and he will move forwards after he's attacked. Keep doing this until he is in front of the pearl. Remember, don't get hit by the energy orbs. Charge up a big energy shot and shoot the pearl to hit the boss with the laser beam he is now standing in. You need to lure him twice into the beam, after the second time he won't come near the beam any more, but will stand just in front of it. To deliver to final blow you must hold a charged energy shot and swim to the boss to lure a swipe attack, as his swipe goes through the beam area release the charge to deliver the final blow.

When the energy god is killed, a cutscene will commence showing visions of an ancient civilization. In particular, it shows the Krotites desiring destruction, bringing the death of two civilizations. After the scene, you can collect the Tooth dropped by the god, and proceed through the passage behind this god. This passage leads back to the entrance, although it has a side passage which you can open much later in the game.

To continue to Open Waters, look for a pearl in one of the side passages on the right. Use the bind spell, and bring it to the door blocking the path, and trigger the pearl using energy form. After it opens, you can swim right to proceed to the rest of Aquaria. 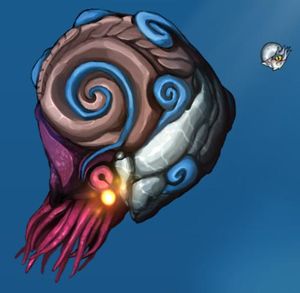 There is an optional boss now available in Home Waters, located to the southwest. While you can reach it earlier, it wasn't likely you could scratch it.

With your new energy form, you can now challenge the Nautilus near Naija's home. The Nautilus has a strong shell, but is injured to shots to its front. It's main attack is spinning and charging towards you. It will also release smaller Nautilus as well and launch a set of homing shots (evaded by quick movements that guide them towards a wall). An easy way to defeat the boss is to grab the stone lying near the entrance to the cave before turning into Energy form. Don't try to drop the stone on the boss. Just let it float adound and use it as a shield. When the boss charges towards you it will collide with the stone and take damage. As it takes damage, it will turn red, and when defeated, you can collect the Nautilus pet egg at the top.

In addition to the boss, you can also locate an alternate entrance to the Energy Temple. It is found at the bottom-left of the map, and is opposite the exit to The Song Cave. It is the Krotite Armor treasure, and can be used as an alternate costume for Naija.