While progressing through the game, Naija learns 8 different forms (including her normal form) she can access via singing.

The normal form, or "Song Form" for Naija is her natural, i.e. original form. By pressing and holding the right mouse button, a note menu will appear allowing spells to be cast by using their relative note combinations. Primarily these spells are used to alter her form and thereby her abilities, although there are a few spells that are native to this form. 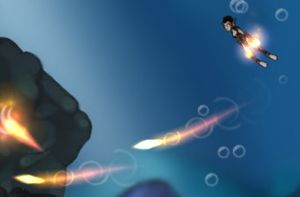 The first form you will obtain. It can shoot spikes of energy (look like flames) whenever you click the right mouse button or press control. You can charge up your shot by holding the attack button for a moment, then releasing it.

There are 3 forms of a charged up shot

There are energy balls (big white pearls) you need to shoot with either the energy or the dual form (Li) to activate a door. 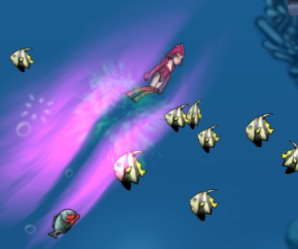 The beast form doesn't have a regular ranged attack, but attacks with Naija's jaws and teeth. When dashing towards an enemy, Naija will bite it and try to devour it (given it has a certain size). This dash leaves a pink trail that looks like a fish with a fin and a mouth. Whenever you devour fish or certain jellyfish, Naija will regain health (fish award very small amounts of health due to their school size, whereas jellyfish grant greater amounts of health). Devouring enemies, except in the case of large jellyfish, won't award health. Additionally, whenever you devour certain enemies (most of all those which can shoot), Naija will get a limited amount of "ammo" of the projectile the devoured enemy usually fires. Pressing the attack button now will fire the latter, in the direction that Naija is moving. The beast form's limbs are strong enough to propel Naija through every current there is in the game that you couldn't pass before, The leap attack also allows you to leap higher out of open water than any other form. Eating Spicy Soup gives Naija the temporary ability to fire shots without devouring monsters. 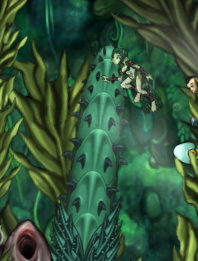 The nature form has very a limited capability of offensive strategies. The attack button will cause Naija to throw a small seed, which will sprout into a pair of flowers when hitting a wall or a floor. They do not do any damage to foes. The charged attack, however, will cause Naija to throw a larger seed, which will sprout into a giant cactus-like plant with thorns, blocking the path and damaging foes on physical contact. This plant can also damage anemones. Beware those thorns, though. While they won't hurt Naija in her nature form, touching them in any other form will cause damage to her. Naija will also gain immunity to any other thorns and anemones found in the game. This form's attack is also used to open hidden portals, looking like big blue sea urchins, and certain large red plants that contain the pearls used by the energy form to open some doors.

The Big Thorn also has advanced uses for climbing around on land. For example, if you are triangle-jumping your way up a chimney, you can plant thorns sideways out of the wall for a ledge to land on and jump from. Also, if you place a Big Thorn right underneath you, it will probably Thorn Launch you high into the air. (Note: Using Thorn Launch on monkeys in trees isn't particularly useful, but it is hilarious.) 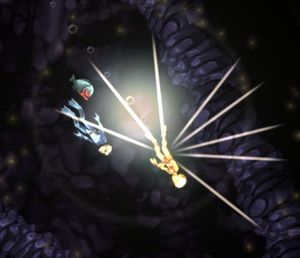 The sun form doesn't have any attacks and is also quite defenseless. Its sole purpose is to light the dark areas of certain "dungeons" and maps and to progress through The Abyss. Pressing the attack button won't do anything, but charging the sun form's "attack" will cause sun rays to burst away from Naija's position and lighten her environment for a short period of time. While in sun form you are able to use the minimap and the map again in dark areas. The sun form is also useful for lighting lamps in the whale's mouth. 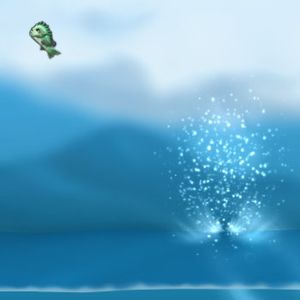 The fish form also mostly defenseless. When pressing the attack button, you will "shoot" bubbles in the direction your mouse is pointing, but they won't cause any damage. There is no charged shot in this form. The fish form enables you to travel faster and to slip through tight passages you normally wouldn't be able to pass. It will also allow you to swim past certain enemies unnoticed (like the starfish that hide in the background or the Sea Dragon). You can trap some creatures in the bubbles you shoot and then bind them and carry them with you. A useful place is The Abyss where you can catch the glowing jellyfishes. This way you have an extra light if you can't (or don't want to) use the Sun form. If you eat a Swamp Cake you make poisonous clouds in Fish form.

You get Fish Form in The Kelp Forest, far to the left and then down. It's in a little swirl of caves that look a little like intestines and are just north of Naija's house. The actual entrance is a little hole in a bump in the ground. It is very easy to miss! Inside you will find a fishy puzzle involving song and colored fish. Sort the fish into their proper caves to succeed. Fish form will be very useful for travelling quickly and unlocking secrets for the rest of the game. This is very good to get early on. 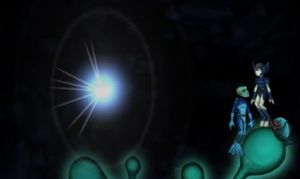 The spirit form's main purpose is to get you past obstacles you normally couldn't pass. While in the spirit form, the time will stop running and you can move away from your body (don't be surprised the first time you enter this form, your game didn't crash). When pressing the attack button, Naija's spirit will try to reincorporate with her body at the spirit's position (like teleporting your body to where your spirit is). This will only work at certain crystals, though, which have a blue color and emit a blue glow. The spirit form will cancel when moving too far from Naija's body.

You get Spirit form by breaking back into upper Mithalas using a Plant Form Tunnel. It's inside one of the pods in outer Mithalas. You'll have to defeat three Ghost Banshees in what amounts to a raw power and dodge fight.

The dual form lets you merge with Li to form one being. You will have two sides now, which you can switch by rolling (either hold your left mouse button and quickly draw circles around Naija/Li or press R on your keyboard). 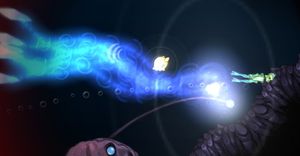 In this form you are able to shoot a strong beam of several blue energy spikes, but this will only work when your attack is charged. In short: The dual form doesn't have a normal attack. Whenever you kill an enemy in the Li form, you will absorb its energy (literally) and raise your invisible counter by 1. After killing 3 enemies, your counter is full and you will hear a small screaming sound. Killing more enemies will visually absorb their energy, but doesn't raise your counter above 3. You won't lose your counter when changing forms or leaving a map. 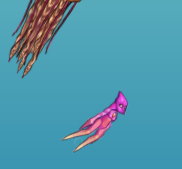 This form has no standard attack and won't be able to attack without the help of the Li form. When your counter reached 3 by killing enemies in the Li form, you are able to charge the attack of the Naija form. Releasing the attack will unleash a devastating scream, which will instantly kill every smaller enemy in range and severely damage greater enemies (like the Green Sea Dragon in The Kelp Forest). You should switch to the Li form after screaming since the Naija form is pretty helpless without being charged by Li.