You take the role of the prince in this magical story book, as you help him attempt to rescue the captured Arabian Princess. Although the villain(s) of this crime are never identified, they have sent an army of crows and pink blobs to stop the Prince in his tracks. The prince (shown here in his win pose) can only dispatch the crows and blobs with his mighty kick (despite brandishing his sword at the end of each stage.) In addition to being able to run and climb, the prince can also crawl under low passages, and he is an exceptional jumper as well. The Prince must navigate through each stage in order to collect every bag of gold that it contains in order to advance one stage closer to the Princess.

These pink blobs have only one goal in mind: Stop the Prince from collecting all of the bags of gold. The normally wander around the screen somewhat randomly, and will occasionally jump up vines or ladder to reach new levels. They can jump up in to the air if the Prince is located higher than they are, but within reach, so be careful. When two blobs run into one another, they form a Super Blob.

The crows are actually quite similar in behavior and ability to the blobs. They too seem to wander about, generally getting in the Prince's way as he attempts to collect the gold. They will jump in the air to reach new levels or even the Prince himself. And just as blobs do, when two crow collide with each other, they combine to form a vicious Super Crow.

When two blobs or two crows occupy the same place on the stage, they merge and become a Super Blob or a Super Crow. These Super forms are a little larger than the regular forms, but what makes them so deadly is that they typically streak directly towards the position of the Prince one the merge is complete. There is an audible indication that a merge is taking place, so when you hear it, be sure to look out for the location of the new Super enemy and be prepared to kick it, or jump out of its way. As you reach higher levels of difficulty, the frequency of the merges increase. 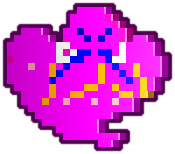 From time to time, a Genie will begin to appear over a particular bag of gold. And it's frequently the bag with the letter that you need to collect next. While it is safe to collect the bag while the Genie is still forming, it is impossible to collect the bag once the Genie has formed until enough time has passed and the Genie goes away. You can not kick the Genie or remove it in any fashion, so you must wait until the Genie leaves on his own. From time to time, the Genie will decide to lob an orb of energy at you. Get out of its way, because there's nothing you can do to stop it. The frequency of the orbs increase as you progress through the game.

The fair (blonde?) Arabian Princess waits for the Prince at the top of Stage 4. While she is the ultimate goal of the game, she does nothing to influence the action taking place on the screen, and merely waits patiently for rescue. If you reach her successfully, you will be treated to an intermission in which the Prince and Princess ride away on a magic carpet.