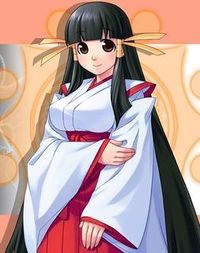 The Kasuga family is renowned for its expertise at performing purification rituals and assisting in all matters related to the Elemental world. Maori Kasuga (春日 舞織, Kasuga Maori?) lives with her older sister Tsuzune and her younger sisters, Koito and Kouta. She does her best to take care of her younger sisters, and through hard work and discipline, the family tries to maintain the generations-old traditions of the Kasuga shrine. The Ministry of Elemental Affairs has requested that Maori and her sisters use their powers to investigate the skies of Tokyo.

The Kasuga family has been performing blessings, exorcisms, purifications, and other rituals for centuries. These techniques have been passed down from generation to generation. Maori is the second oldest of the Kasuga family. She is in charge of directing her sisters during the rituals. Tsuzune, the oldest, is often in front of Maori. She takes the position of attacker, as well as guardian. Tsuzune’s Elemental powers are not quite as strong as Maori’s, but her physical strength is unmatched, the younger sisters, Koito and Kouta, are often behind Maori and assume the role of support. When the entire family’s strength is combined, they can unleash a magic arrow that has never failed to repel demons.