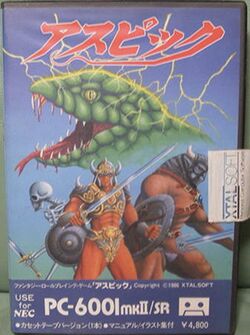 Aspic is an RPG developed by Xtalsoft (pronounced Crystal Soft) for several popular Japanese home computer in 1986. Aspic is also the name of the great evil that appears in the game. Versions were originally produced for the NEC PC-6001 and the Fujitsu FM-7 computer systems. In 1987, a version was released for the Sharp X1 computer under the title Aspic Special. In 1988, the game was also ported for play on Nintendo's Family Computer Disk System and published by Bothtec.

Aspic is the sequal to one of Crystal Soft's earlier games, Lizard. Aspic begins right where Lizard ends. The player obtains the Book of Truth, which is needed to break the curse on the princess. He returns to the king only to find that the princess is missing. Three days prior, a wizard appeared and informed the king that there was another way to save the princess, so the king entrusted the princess's life to the wizard. Now that you've returned, the king begs you to find out what's become of the wizard and the princess.