Head to the right. Smash the soldier hiding under the flower and break the pot for a red potion. Jump across the gap and hit the second soldier. Continue to the right, defeating two soldiers hiding in tree stumps along the way, then use the potion on the grey blocks to enter the well. 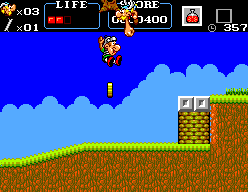 Smash the soldier hiding under the pebble and jump left. The first platform's pebble doesn't hide a soldier. Collect the meat and jump-attack the second pebble, which does hide a soldier. Destroy the blocks with potions (the bottom-right block contains a bag of gold) then stand on the water spout to return to the surface. 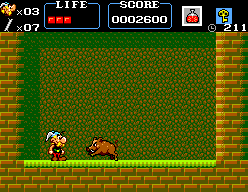 The wild boar races back and forth, pausing when it hits a wall. Hit it three times to turn it into a roast boar. To fight it without taking damage either use jump-attacks or else wait until it runs into a wall then hit it before it turns around and comes after you again. 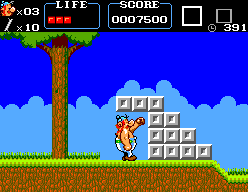 Smash the blocks for crossbones

Smash the blocks for crossbones, then head down the well. Immediately hold the left direction as the platform drops and you'll enter a secret area. Head back to the right and jump onto the raised portion to continue. The fourth block from the left contains crossbones. If you take the upper path you'll surface right away, but if you continue further in you'll find more treasure. Smash the blocks to find a coin and a bag of gold. Continue upwards. The helmet represents an extra life; to get it, smash the blocks right in front of the soldier, then buttsmash the ones below you, ensuring you will land on the ground and not fall down the hole. Then jump back up and smash your way to the right. Quickly jump across the falling platforms, then smash the well cover off to ride a waterspout back to the surface.

The blocks to the left contain a crossbones and a bag of gold. Continue right. Smash the tree stump soldier. This one throws apple cores, so watch out for him. Then smash the pot and grab the key. Head right, collecting the meat and smashing your way to the door (these blocks are empty). Once inside you'll face a boss minigame. 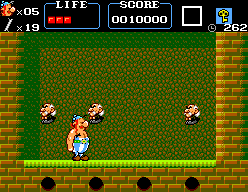 Tiny old men will jump out of the holes

Tiny old men will jump out of the holes. Simply stay clear of the holes and keep swinging. Once three of them have held up signs with red circles after being hit (this does not have to be one after the other, just in total) one will come up with a white flag, leaving you the winner.

After this you are able to choose which character to do the round with, and you only have to complete the round once rather than twice over.