Asterix and the Magic Cauldron/Commodore 64 version

From StrategyWiki, the video game walkthrough and strategy guide wiki
< Asterix and the Magic Cauldron
Jump to navigation Jump to search

Asterix and the Magic Cauldron | Table of Contents | Gameplay | Walkthrough

Asterix is controlled with a joystick connected to port 2. If using a keyboard, Q and Z for up and down, and I and P for left and right. Space serves as the fire button.

Outside combat, press fire twice to drink the potion.

Inside the combat window, you can attack by holding a fire button and pushing in a direction. The attacks would be a punch, kick and uppercut.

For this platform, combat is rather fast and deadly. 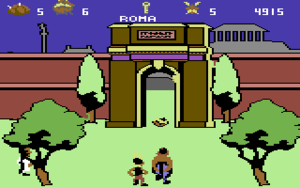 The last piece in the game. If you don't see it, then the game is unwinnable without cheating.

Some versions of this game have a bug which makes the game unsolvable - the last part of the cauldron cannot be picked up due to it being covered by background graphics of a triumphal arch.

In order to fix the bug, may be necessary to suspend the game using a freezer cartridge which allows entering POKE commands. POKE 18014,14: POKE 18015,152 will put the piece within the arc de triomphe. 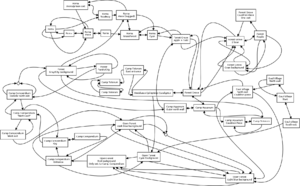 Diagram of the world map.

In this version, the world map is just as chaotic as Zork's twisty passages maze. As early as the Gaul village, simply moving north then south brings you to the northern exit of the village.

As such, it's easiest to follow directions rather than consulting a map.

If the final piece is visible, you can collect it to win the game. Otherwise, the game is unwinnable, and the only thing left to do is farm as many points as desired from the Forest Grove where you see the apple and gold. (South, east and east - at the forest grove, exit to the north and re-enter by going east.)