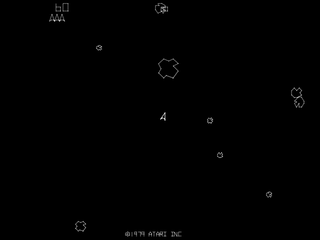 It very easy to fall in to the trap of shooting all of the larger asteroids first. They're big, they're slow, they're so hard to miss. But the fact is, the more you split up the large asteroids before tackling any of the smaller rocks they produce, the more likely the screen is going to fill up with fast moving hard to hit asteroids that are more likely to kill you. Large asteroids can be easily maneuvered around from a stand still. With smaller asteroids, by the time you accelerate fast enough to escape them, you may already be dead. So when you hit your first large asteroid, try to take care of the resulting medium and small asteroids before tackling the next large asteroid. You'll have fewer problems to worry about at one time.

If an asteroid is close and is heading directly towards you, do not rely on your missiles to destroy it. You can only have four missiles on the screen at once, and you might be out of missiles to use. Get out of the way!

One thing is certain, if a saucer is on the screen, it should be your biggest concern. Even though the large saucers are less of a direct threat than the smaller ones, you shouldn't pay any less attention to them because all it takes is one stray shot from them to kill you. Saucers can be a menace for more than just shooting at you. When they or their bullets collide with an asteroid, they can create more asteroids than you are prepared to deal with. Small saucers need to be disposed of quickly before they get an opportunity to take aim and destroy you. After 10,000 points, only small saucers will appear from that point on.

Under typical arcade settings, you get a bonus life every 10,000 points. By applying the below strategy, you can accrue a massive amount of points that will earn you more extra lives than you know what to do with. Bear in mind that some expert Asteroid players have played games that lasted over 48 hours! 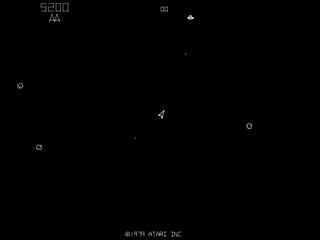 When it comes to raking in the points, the trick isn't to hit a lot of asteroids. In fact, for really high scores, the asteroids just get in the way. The real points are in the small saucers, worth 1000 points apiece. So create an environment that will allow for maximum scoring potential. Eliminate all but two or three small or medium asteroids from the screen. Then proceed to one of the corners of the screen. Wait for a saucer to appear. If it appears on your side of the screen, blast it. If it appears on the other side, use the wrap around nature of the screen to destroy it from afar. Pretty soon you'll be getting 1000 points for every saucer that appears, and an extra life for every 10 small saucers.

Through the game, you'll be zooming all around the screen, especially if you use the ambush strategy. But when you're down to one last asteroid, play it safe and return to the center of the screen before that asteroid gets wasted. Reason being, if you stick too close to the sides, you're more likely to collide with one of the newly entering set of asteroids that initiate the start of a new round. If you position yourself in the center before they arrive, you'll be in the best place to start over and drill each rock down to size.

Hyperspace is for emergencies only[edit]

Because of the unpredictable nature of Hyperspace, it is best not to use it except for emergencies. You never know where you're going to end up, and it may place you in the path of another asteroid without giving you enough time to react. If destruction is imminent, either from a saucer bullet or more than one asteroid bearing down on you, go ahead and warp out of there. Otherwise, hold your ground or thrust to a new position.

You may not know where you are going to end up when you hyperspace, but you will be facing the same direction when you come out of hyperspace. Start shooting as soon as you press hyperspace. That way, your missiles will act like a flare and show you where your ship is located.