This starts with a button pressing puzzle, but is generally easier with five buttons. They can be solved by simply whether a phrase starts to make sense, and undoing if you make a mistake. The three phrases are "From the skyway,", "you can really", "see all of the..."

This leads to a XOR masking puzzle with many buttons. There are two potential words - the decoy word is "PARK", and is visible if you simply select all the buttons. It may be better to toggle buttons one at a time, choosing the state to whichever appears to match the non-decoy word more closely.

The correct word, "TRASH", is spelled slightly diagonally. Focus on forming the last letter first, then try solving the rest. 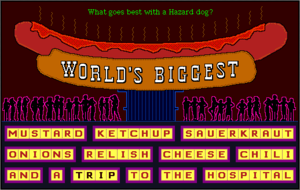 This is a jigsaw puzzle, where you move strips to the correct location. It's easy to solve if you focus on the hotdog as an upward arch.

Once you solve the jigsaw, you are presented with a set of anagrams. Mustard, Ketchup, sauerkraut, onions, relish, cheese and chili go quite well with the hot dog. The Macintosh version has you solve them all at once, while the MS-DOS version sends them one at a time.

The last line is more difficult, since the letters are no longer confined to a given word. It may be easier to tackle this line by focusing on the smaller words first, as they are most likely articles. 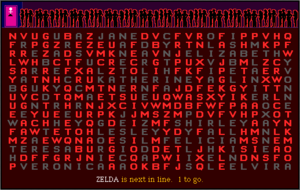 This puzzle starts with a word search. There are six diagonal words, generally found on the left.

The word search is followed by a cryptogram, the hint gives a few words for you. Note that the title appears within the cryptogram, and that you can complete the largest word without additional help. "Without a doubt, the ladies room is the attraction with the longest line of all". 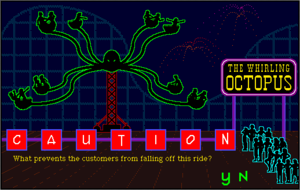 Complete the sign and text first. Given the location of the text, you will note that one line of pixels chops off the top, allowing you to complete the fence attached to the text. Next, focus on the roller coaster track, and the jigsaw should be easy to solve.

The concatenation puzzle is slightly easier, since the words grow independently, and you should focus on one at a time. What prevents the customers from falling off this ride? Absolutely Nothing.

You need to complete a series of word squares. Luckily, the word "CAT" appears in each one.

Make note of the word ASYLUM. In the MS-DOS version, you will have to write it down, as a bug will prevent it from being shown again. 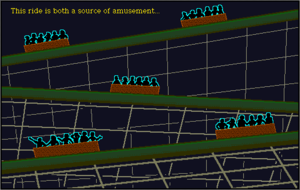 First, focus on the text, and the two logs that can be built from said text. Extend the two ramps that are partially constructed. The rest of the puzzle should be easy to construct using the same tactic.

The MS-DOS verion has more distinct supports, allowing you to get a better picture of how to solve the puzzle. It is also easier to join similarly coloured people due to shading. 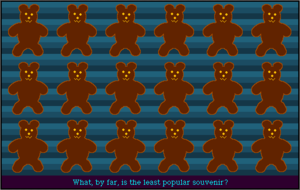 Complete the text at the bottom.

This jigsaw puzzle is more difficult than others, due to the similarities of the pieces. However, you can still work your way up after completing the text. First, try to fit pieces that have the head stop near the top of the piece and showing a tip of a leg. The next row should have the main bodies of the souvenirs. The next row has the head at the bottom.

The MS-DOS version gives color to the bears, making it easier to tell if they're mismatched.

Trace the top of the roller coaster, and get the crowd together.

The MS-DOS version of the puzzle is slightly different - it includes a fence, and has a more uneven roller coaster (making it easier to identify which pieces are together.)

The answer to the question is: "Because the ride operators pack 'em in and send 'em off as fast as they can!" 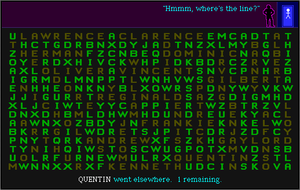 This is another word search. Diagonal words appear only on the left.

If you solve the clue, you will see the word "bomb". The adjective next to it is "Cherry", and you can see that the last word is "toilet".

This provides the phrase: "He will soon discover that some idiot just threw a cherry bomb in the toilet". 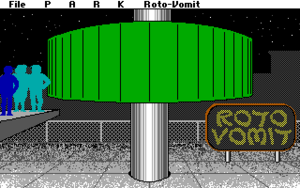 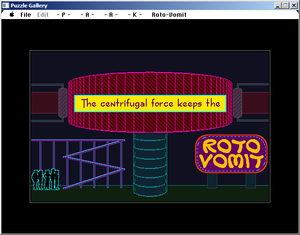 The sign and ground can be solved first. This is then followed by the ride itself, as found in the middle.

In the MS-Dos version, the puzzle layout is different, but follows the same tactics.

The next concatenation puzzles explain how the ride works. Solve for the three phrases, "The centrifugal force keeps the" "customers pinned to the inside wall..." "even when the floor lowers down!"