This is the third set of puzzles, which may be completed in any order.

This is a two-part puzzle.

First, press the buttons to form a large sentence. The first correct button should be immediately obious, resulting in the phrase "What's the first thing you see on the train ride?".

The next puzzle requires moving polyominoes into the correct position. They will spell out the phrase "The toxic waste dump".

In this displays, you will need to click on buttons to form a word. There are two visible words, one of which is a decoy visible if you select all buttons. Instead, toggle buttons one at a time until the actual word is visible.

In the first puzzle, the word is "OOPS", and the decoy is "HEAT".

In the second puzzle, the word is "DARN" and the decoy is "AHPG".

In the third puzzle, the word is "HECK", and the decoy is "FHPA".

In all three puzzles, it may be easiest to solve for the last letter first. 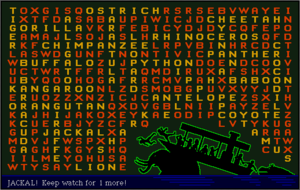 This puzzle starts with a word search, before becoming a cryptogram.

Get the letters to match the clue shown at the bottom left when the cryptogram appears. When solving the cryptogram, look at the smaller words first, and try to fit the articles "TO" and "TOO". You should then be able to solve the word "mechanical", followed by animals. The resulting text should be "When the fake mechanical animals became too costly to fix the management decided to use live ones instead". 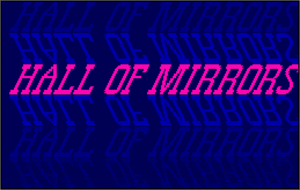 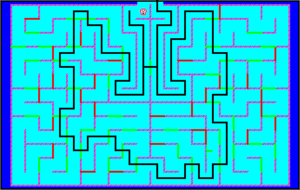 There are two puzzles. First, a jigsaw, then a maze.

In the Macintosh version, the jigsaw is solved by completing the purple text first, and building the mirrored text. In the Dos version, it is more easily solved by starting the tiles containing the dark blue text (which appear at the upper and lower edges), and working inward to the brighter text.

This is followed by a roundabout maze. As shown in the image, there is an extremely long route required to go through the maze, through the secret doors and around the invisible walls (shown in red). Once you reach the exit, the short cut will be revealed, which is a secret door in the middle section.

This puzzle is a series of twenty-seven word squares. 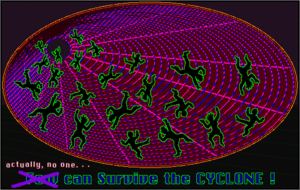 This is a jigsaw puzzle. Finish the text below, and trace the outer circle. The other pieces should fall into place.

The MS-DOS version only does what amounts to a palette shift, but it may give a better picture of the puzzle before it is completed. 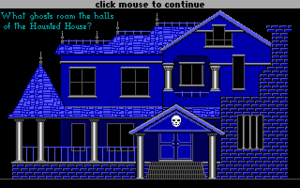 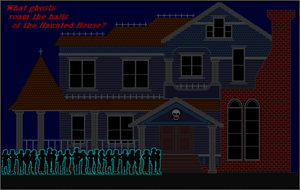 This is a jigsaw puzzle. You can join the text, but the solution is built starting from the crowd. After the crowd, you can build the door. You can then place the red bricks to the right, and complte the area directly above the door.

In the Dos version, the crowd doesn't exist, and the building is monochrome. However, you can still combine certain features (e.g. Windows, rooftops, the ground, and side walls) before completing the center. 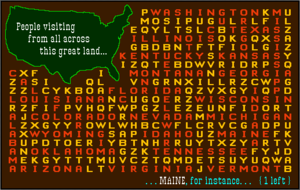 A word search puzzle. Most of the words are horizontal, making them easier to find. However, it is better to search for the diagonals first, in case they become hard to see. 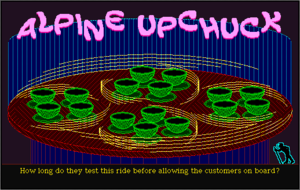 As with most jigsaws, complete both pieces of text first. Once the text is in place, complete the puzzle center of the ride.

This is a series of pentonimo puzzles. They are most easily solved by building the word first, although the word may occasionally appear diagonally (starting with "The").