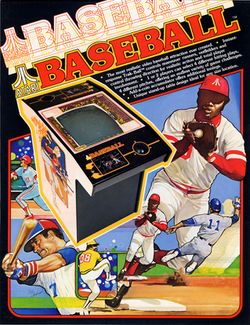 Atari Baseball is, as the naming implies, a baseball arcade game that was released by Atari in 1979; it utilizes a Motorola M6502 (running up at 750 KHz), and both players must use a trackball to control their respective stick-figure team, with two buttons (one to scroll through your pitching/hitting choices, or swing the pitcher's bat, and another to make the pitcher throw the ball, or confirm a pitching/hitting choice). One credit buys a certain number of innings, depending on how the cabinet is set, and much like in the original version of Atari's own Football, both players play on the same credit - and once the game has come to the end of the last paid-for inning, you will have to insert a second coin if you wish to continue playing. Just like with real baseball, whoever has scored the most runs by the end of that ninth inning (or in this game, if neither player has another coin to continue at the end of the last paid-for inning) wins the game; if both players' scores are tied by the end of the ninth inning, the game will go to a tenth inning, but if they're still tied by the end of the tenth (and extra) inning the game will end. This was also originally meant to be the first title from Atari to showcase digitized speech; Dan Pliskin had designed a speech board that featured the calls of an umpire, but the company rejected the idea.