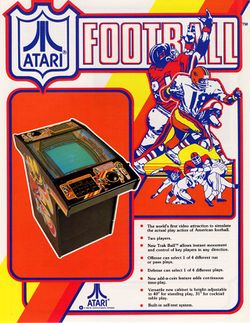 Atari Football is, as the naming implies, an American football arcade game that was initially released by Atari in 1978 as a 2-player cocktail table, and rereleased in 1979 as a 4-player table; both versions utilize a Motorola M6502 (running at 750 KHz), and both (all four for the 1979 rerelease) players must use a trackball (it was the first game to use them) to take control for an "O" (for "offensive") or "X" (for "defensive"), on the field (which has Atari's "Mount Fuji" logo in the centre). On the 4-player table, the trackballs on the right side of the two control panels are for the quarterbacks, and the ones on the left side of them are for the receivers - and both types of table also have "Play Select" buttons upon their control panels, which can be used to select plays (and, in the case of the offensive team, to pass the ball to the receiver). The players must roll their trackballs in the direction they want their letters to go; they can also pass the ball by pressing the Play Select button, and tackles can be made by touching another letter, with the ball. The 4-player table also added another play for the offensive team: Punt/ Field Goal, for which the Play Select button could be used to kick the ball - and, just like in real U.S. football, a touchdown is worth 6 points while a field goal is worth 3 points, a safety and a conversion are both worth 2 points and a kicked conversion is worth 1 point. Whichever team's scored the most points when the timer runs out wins the game; on the 2-player table, both players play on that same credit, but upon that 4-player one, one credit buys a 2-player game, while two buy a 4-player game.