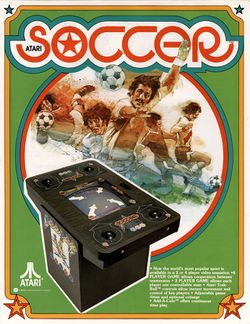 Atari Soccer is, as the naming implies, a soccer arcade game that was released by Atari in 1980; it utilizes a Motorola M6502 (running at 750 KHz), and the players must use a trackball to take control of a player (two on each team, and if there are only two players, the CPU shall fill in for 3P and 4P), with two buttons for kicking the ball with their left and right feet. The human-controlled players will be indicated by the "squares" (1P and 3P) and "crosses" (2P and 4P) upon their heads - and just like in real association football, whoever has the most goals when the timer has run out wins the game. 1P and 2P's team is black, and 3P and 4P's team is white; and as with the four-player version of Atari's earlier American football game, one credit buys a two-player game and two buy a four-player game.