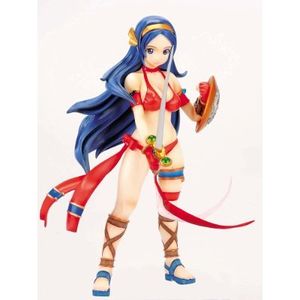 You control Athena throughout the game. When Athena begins the game, she starts out with 12 units of health, one unit of offensive power for her kicks, and no defensive power. She will lose health as she gets attacked by enemies. If she runs out of health, she will lose one life. If she loses all of her lives, the game will be over. It is possible to extend Athena's health meter up to 40 units by collecting Crystal Hearts. Each heart that she collects will extend Athena's health meter by two units.

Athena can jump in the air, but her jumping ability improves with the Shoes of Icarus. After collecting them, her jumps repeat in a three jump pattern. The first jump will be a small jump. The second jump will be a higher jump. The third jump will be a high jump that travels much farther. In the NES version of the game, Athena starts out with the ability to perform high jumps and she can never lose it. However, the second and third jumps are indistinguishable from another.

Athena starts out with the ability to kick her enemies. She can gain offensive power by collecting weapons from defeated enemies and by breaking blocks. Athena needs a weapon to break blocks, and not all weapons are capable of breaking blocks. Athena can gain defensive power by collecting armor, helmets, and shields from broken blocks. As she does, her defensive power will improve, but it is possible to lose these pieces of armor if the enemy breaks them. Collect mirrors to improve the durability of her armor.

The images below show a progression from weakest to strongest, as Athena proceeds to collect better equipment. She starts out on the left with no items. Next, she is dressed in green armor, wielding a blue sword. The blue armor is stronger than the green, and the yellow sword replaces the blue sword. The gold armor is the best, and the red sword is the upgraded version of the yellow sword, and has the ability to fire projectiles. If Athena achieves the ultimate in equipment, full gold armor and possession of the Fire Sword, Athena will actually grow slightly until the power of the Fire Sword wears off. This effect is only present in the arcade version of the game.