Athena finds The Door Which Shouldn't Be Opened

Athena falls down the hole to the World of Forest below.

At the start of the game, we see Athena wandering through one of the corridors of the castle where she lives. She stumbles upon a door, and jumps through it without hesitation. Like Alice in Wonderland, falling through the rabbit hole, Athena descends down a long pit, losing her dress along the way, and lands in the first of eight worlds which she must explore, the World of Forest. From here, the game begins immediately, forcing Athena to defend herself against Nuupahs and Boas with only her kicks until one of the defeated Boas drops a club for Athena to pick up and wield.

Throughout the game, Athena can walk over various parts of the floor in an attempt to summon a flower to grow. The locations of the flowers stay the same from game to game, so once you find a flower at a particular location, remember it and search the same place again next time. When struck, flowers will released one of two kinds of hearts. They will either release four regular hearts which can be collected to restore some of the damage done to Athena, or they will release one Crystal Heart, which will expand Athena's life meter by two units. It is important for Athena to discover both types of flowers, in order to keep her strength high, as well as increase it for the tougher battles ahead. She can even make flowers appear underwater. 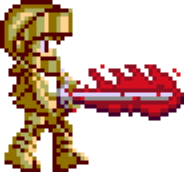 Ultimate Athena is a super powered form of Athena which she can achieve in one of two ways. Ultimate Athena is stronger and faster than regular Athena, which is a plus, but she is also taller than Athena which can be a problem since she can't fit through tunnels that are only two blocks tall, and she can't climb ladders, which is particularly a problem in the last level.

The easy way to transform into Ultimate Athena is to use a platform. Two platforms are hidden in the game, one in each of the first two stages. In order to find them, Athena must typically stand on some object in the stage, and push down. This will cause a platform to appear somewhere nearby. When it does, have Athena jump onto the platform to instantly transform her into Ultimate Athena, complete with full Gold Armor and the Fire Sword. However, once Athena swings the Fire Sword often enough to reduce her remaining hit points to five, she will revert back to the exact equipment she had before she transformed; she will not be allowed to keep the gold armor unless she had it before stepping on the platform.

The other method to become Ultimate Athena is to actually earn it legitimately. In order to do this, you must collect the following items: Gold Armor, Gold Shield, Gold Helmet, Gold Crown, Fire Sword, and the Red Ring. Possession of these six items will set Athena's Power and Defense stats to 16 each, which will trigger her transformation into Ultimate Athena. You will stay this way until her hit points reach five. At which point, the Fire Sword will become the Red Sword, and you will lose the Red Ring, but you will keep all of your protective gear.

Though not every stage will conform to this design, the majority of stages have the following layout, as depicted in the diagram below:

Athena will start out on the left side of the stage, on the top level. At some point, the stage will branch, allowing Athena to descend to a lower level, or remain on the top level where she started. The lower level is typically more dangerous, but also contains more valuable items. If Athena opts to take the lower level, she will typically have to resurface to the top level around the middle of the stage, unless it is possible to break blocks which lie between the first and second lower levels. Once resurfaced, Athena will again have the option to drop down to a lower level or remain on the upper level. The boss of each stage is typically found in the top level. If Athena advances all the way to the end of the lower level, one of two things will occur. If Athena finds and possesses the Lamp by the time she reaches the end of the lower level, she will be allowed to warp without fighting the boss. This often has consequences however, as important items are provided to Athena for defeating the stage boss. If Athena does not have the Lamp, she will be forced to start back at the very beginning of the stage. Unless she has a K Slate or the Protective Harp, she will lose all of her items, and the remaining time for the stage will remain the same, making it even harder to complete the stage. In general, it is better to prepare well for the boss fight, and challenge the boss before moving on to the next level, then to try to warp.

For the most part, the NES conversion of the game is relatively accurate to the Arcade version, in that both are incredibly difficult. However, there are a few subtle differences that are worth noting.