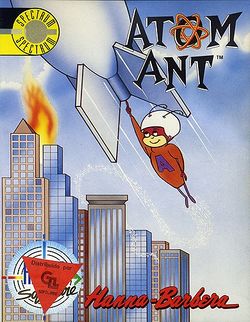 Atom Ant is a platform game that was developed by Twilight for Hi-Tec Software and released on the Sinclair ZX Spectrum, Amstrad CPC and Commodore 64 in 1990; it's based upon the Hanna-Barbera cartoon of the same name (which aired on U.S. TV with Secret Squirrel and Squiddly Diddly in 1965).

The Mayor has received a vicious ransom note from "Mad
Dog Jackson" - the big boss of the city's deadliest gang. He
has threatened to blow some of the city's most treasured
buildings to smithereens unless the sum of one million
dollars is paid to him. Once again it's time for our favourite
super-hero, Atom Ant, to leap into action and save the city
from destruction.
© Hanna-Barbera Productions Inc. 1990