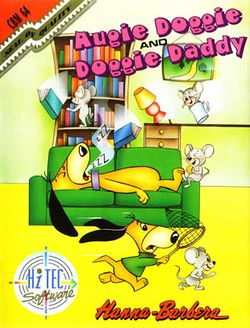 Augie Doggie and Doggie Daddy is an action game, which was developed by Digital Design for Hi-Tec Software and released on the Commodore 64 in 1991; it is based on the Hanna-Barbera cartoon series of the same name, which was originally aired as a part of The Quick Draw McGraw Show from 1959 to 1962. The player must take control of Augie Doggie, who's on a mission to clear his house of pests (which can either be mice, bees or beetles) while Doggie Daddy is taking a nap - and the game is comprised of four stages, each one set in a different part of the house (The Basement, Downstairs, Upstairs and The Attic). Augie Doggie starts on the left side of each stage, and must walk to the right to catch ten pests before a timer runs out; however, he can only hold five at a time, so once his net is full, he must return to the start of the stage to free the ones he has caught (and make room for more).

Augie Doggie must also avoid bats, balls and bomb-dropping cats on paper aeroplanes, as they shall cost him one of his five lives if they hit him; on the second stage, he must also catch falling plant pots because they shall slowly cause Doggie Daddy to wake up (indicated by a pair of eyes in the bottom-left of the screen) if they hit the ground. If Doggie Daddy is fully woken up, he will say "Augie my son, try not to wake me again" - and this shall also cost Augie Doggie a life (or the game, if it was his last).