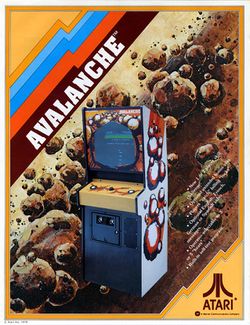 Avalanche is an arcade game which had been released by Atari in 1978; it utilizes a Motorola M6502 (running at 756 KHz), and the player must use a "rotary" controller to direct six "paddles" left and right across the screen and catch rocks that are falling from the top of the screen. There are six rows of 32 rocks at the start of the game (for a total of 192 rocks) - and once you have pressed the Serve Button (or hesitated for too long) they shall start falling. The number of points you shall receive for each rock caught depends upon which row it was in, but every time one row gets cleared one of your "paddles" will also disappear and the remaining ones will shrink. The rocks in the third and fourth rows are also smaller (and faster) than those for the first and second ones, and the ones for the fifth and sixth rows are even smaller (and faster) than those for the third and fourth ones; if you fail to catch any rock the "Miss Counter" will increase by one (your maximum number of misses ranges from 3 to 6 depending on how the cabinet is set), and any rocks that were falling at the time will be returned to their original positions. Once all six rows have been cleared the next wave will see you starting off with only three "paddles" - and on the third wave, you shall start off with only two. The fourth and final wave will see you starting with only one "paddle"; if you are lucky enough to be able to clear it, your game will end.