You will fly a short distance outside. There will be a few enemies that attack, but none pose a significant threat that you can't deal with.

When you approach the space station, the automatic doors will begin to open. However, fly through them quickly, because they will close shortly after.

The first room of the station has ceiling and floor turrets, which are destroyed with either the round vulcan or explosion bomb.

There are a few notable enemies: 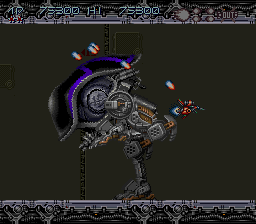 On approach to the boss, you will see a set of objects holding up the upper wall. while the left can be destroyed without issue, it will begin to fall once you destroy the right-hand set.

The enemy will be a large walker with a found mounted minigun. It will not become vulnerable to attack until the screen locks position. It can only be damaged when you hit the core, which is behind armor plating. As such, you will have to fire around it (e.g. at an angle, or using the Round vulcan from behind), or try using the explosion bomb when it is moving forward.