The fourth stage is in an underwater cave. It is one continuous trip from the entrance to the boss chamber.

There is a large number of enemies attached to the ceiling and ground. As such, the newly obtained cluster bomb is useful here, but you will have to use a different weapon to hit those on the ceiling.

One enemy appears to be in a circular pod. If you approach, it will jump out to try to damage the ship.

There is also blue blob-like creatures that will attach to the ship. Each amoeba will try to pull the ship downward if they attach. To shake them off, make quick alternating movements. 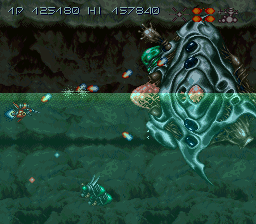 The enemy starts at the top of the area. The cavern will shake for a several seconds, causing rocks to drop from the ceiling, before the boss itself drops.

There are three attacks:

It protects its vulnerable point, but you will need to open it up first. Aim for the green membrane at the top-left corner of the boss to retract is defences and leave the core exposed. You may then attack it by staying at the waterline and firing forward, or by holding position above the vulnerable point and using the cluster bomb. When it starts to shoot from its four turrets, they won't hit your craft if you stay at the waterline, but can pin you down if the enemy starts to approach.