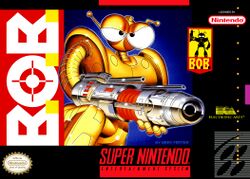 B.O.B. is a video game that was released in 1993. It is a side-scrolling game developed by Gray Matter Interactive and Foley Hi-Tech Systems (not the same Gray Matter Interactive that developed games out of Los Angeles more recently) and published by Electronic Arts. It plays as a 2D shooter and platform game for both the SNES and Sega Genesis. In November 2006, it was re-releasd as part of EA Replacy for the PlayStation Portable.

When B.O.B. crashes his dad's space car on the way to pick up his date, he finds himself stranded on a hostile asteroid filled with enemies. By collecting power ups and using fast reflexes, B.O.B., tries to find his way off the planet and to his date. B.O.B. fights his way through the forty-five levels, including boss fights and spaceship-racing stages.