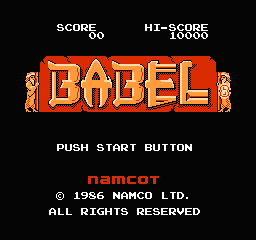 Babel no Tou (literally, the Tower of Babel), is a game developed by Namco in 1986 for the Famicom. It is an action puzzle game, and it was never released for play outside of Japan. The game consists of 64 "floors" or puzzles that involve the positioning of many L-shaped blocks. You must manipulate them to create stairs so you can reach the exit of each floor. Some floors are sealed, and you must collect crystal balls to escape. There are items to collect for bonus points, and a small number of enemies to avoid.

Babel no Tou was converted for play in the arcade using Nintendo's Vs. arcade hardware and released as Vs. Babel no Tou. In 1997, the game was included on a compilation made for the Game Boy known as Namco Gallery Vol. 3. In 1998, the game was also included on a compilation made for the PlayStation known as Namco Anthology 1 where, like all of the Famicom games presented on the disc, an enhanced arrange mode was provided alongside the unaltered original game. In November 1997, a very faithful, yet unofficial fan-made version of the game appeared in Japan for the Sharp X68000 computer.