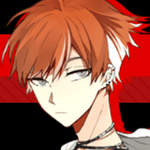 A boy with red hair who acts as the leader of the Bad Apples. He isn't one to express his emotions, maintaining a calm poker face amidst the constant chaos at NEVAEH Academy. He is also quiet, rarely giving off any hints to his thoughts. These factors cause some to find him intimidating upon first meeting him, though he is actually a charismatic and reliable leader.

The item Alma had upon entering the school was red thread. He can freely manipulate this thread to trap his opponents, and he can even transform the thread into a knife.