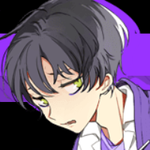 A boy who entered the school alongside Rinka. Satoru never stops studying, mumbling to himself as he does so, and this neurosis makes him appear as if he is about to have a nervous breakdown at any second. Because he is so absorbed in his studies, unlike Rinka, Satoru pays no mind to the strange situation he has found himself in, focusing only on the book in front of him.

The item Satoru had upon entering the school was his set of study materials, composed primarily of his beloved reference book. Satoru never stops reading through it, and panics when it is taken from him. Despite its normal size, it appears to be bundled with an infinite amount of information, an ability which Satoru takes advantage of regularly.