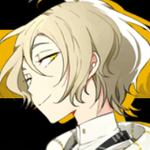 A boy who keeps to himself, calmly drawing as he stands in various locations of the school. Though he appears to be a friend of the Bad Apples, he hasn't officially joined them, nor has he made any effort to follow the school rules as instructed by the Prefects. For this reason, as well as his quirky behavior, he is considered an "odd apple."

The item Shikishima had upon entering the school was a sketchbook, which he makes constant use of, drawing wherever he may be. As he demonstrated during the entrance ceremony, Shikishima's sketchbook has the special ability to make objects appear based on his drawings, an ability which he will sometimes use to assist the Bad Apples.

Chapters 8 and 9 have no choices.