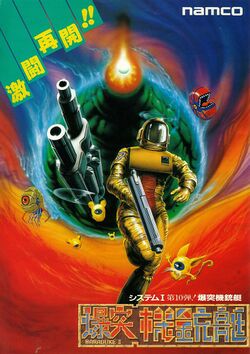 Bakutotsu Kijuutei (爆突機銃艇, Bakutotsu Kijuutei?) (alternately Romanized as Bakutotsu Kijūtei) is a scrolling shooter arcade game that was released by Namco in 1988 only in Japan. It runs on Namco System 1 hardware and is the sequel to Baraduke, which was released 3 years earlier. It was also the second game from the company to allow scores not ending in "0" (the first was Hopping Mappy which was released in 1986), and the second game from the company to not feature a "legal notice" that is typical of their Japan-exclusive sixteen-bit games on startup (the first was Beraboh Man, which was released earlier in 1988). Also like both of these games, it used Yamaha's YM-2151 FM sound chip for its songs - and a DAC for its speech and explosion sounds.

As with that original game, the player must take up control of a spaceman in a biohazard-suit (who's caricature of a Namco employee); only this time, 1UP is "Takky" (who was 2UP's character from the original), and 2UP is "Hommy" ("Kissy" is nowhere to be seen here). These spacemen are now also always facing to the rights of the screens (even if they are moving back off to the left) and cannot go backwards because the scrolling will not let them (much like in the original Super Mario Bros. game). Several new enemies (one of which previously appeared in the aforementioned Beraboh Man), have also been introduced and there are now four different types of capsules - yellow, green, blue and red. As the general rule of game, yellow ones contain Paccets, green ones contain speed powerups, blue ones contain shot powerups and red ones contain Baganns - those aforementioned Paccets will also circle around the spacemen when they are collected, and add on to their scores at the end of a stage.