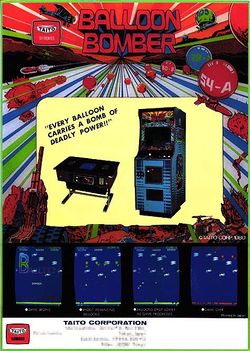 Balloon Bomber is a fixed shooter arcade game which was released by Taito Corporation in 1980; it utilizes an Intel 8080 microprocessor (running at 2 MHz) with discrete circuitry and Texas Instruments SN-76477 for sound. The player must use a 2-way joystick to take control of the tank at the bottom of the screen, with a single button (to make it fire bullets up at balloons) - and every balloon has a bomb attached to it. If you should destroy any balloon without hitting its bomb (for 50 points) it will fall to the ground; unless you destroy it (for 150 points), it will explode, creating a hole in the ground, which you cannot force your tank over. This means that if two holes are created on either side of your tank, you will not be able to move it much - and destroying a balloon with a bomb attached is worth 100 points. Occasionally, an aeroplane will fly into view from the left or right side of the screen, to drop bombs; if you can destroy them before they land, you shall receive a random amount of bonus points. You will also receive a random amount of bonus points after three consecutive hits - but each time you shoot six balloons (or bombs) another group of balloons will appear, floating down in the opposite direction and appearing one row lower than the previous one. Your tank will also receive an extra life (at 1500 points by default); this game is also not to be confused with Crazy Balloon (which was also released by Taito Corporation in 1980, but is not a fixed shooter - more a "don't touch the walls" maze game).