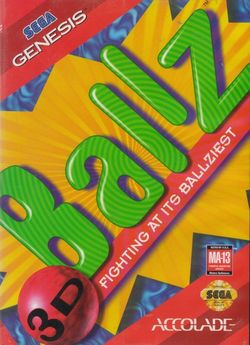 Ballz is a unique fighting game, one of the first to attempt to use 3D on the SNES, although it is limited to characters sidestepping into the foreground and background, à la Tekken 3. Its 8 characters and 4 bosses are similar to the polygonal characters found in other fighting games, except they are all composed of 3D spheres. The game stresses rude, inappropriate behaviour, as evidenced by the electronic billboards in all of the arenas, constantly feeding a stream of insults to the competitors. Although the controls take a little getting used to (especially the Jump button), and blocking is almost non-existent, the ClayFighter-esque moves and hilarious sound samples mean this game still manages to provide hours of decidedly non-serious action.