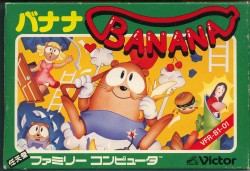 Banana (バナナ, Banana?) is a puzzle game developed and published by Victor Interactive for the Famicom in 1986. The game bears a striking resemblance to an older popular 8-bit home computer game Boulder Dash. The key difference between Banana and Boulder Dash is that the player is not immune to the effects of gravity. There are boulders present in Banana, but they do not pose a threat to the player if they fall on him, they are merely obstacles. Since gravity is always in effect, ladders are the only method that the player has to climb to a higher position.

In Banana, you control a mole which digs through dirt collecting various fruits and vegetables. In most levels, the produce must be collected in a specific order, or the player may become stuck and be forced to restart the level. During the levels, the player must also retrieve a female mole. When all objectives are complete, the player must make his way to the exit. Among the fruits the player must collect are bananas. These are special fruits which give the player one of four items: a bomb, a ladder segment, a rope, or a rock. The player may use these if he takes a misstep in a level and gets stuck. If either mole walks under a rock, that rock shakes. When the moles move out from under the rock, the rock and any rocks on top of it fall. The player cannot die from a falling rock, but he may become stuck if it blocks his exit. At the end of each level, the number of steps the player took is totaled. This step count negatively affects the total score. There are 105 levels.