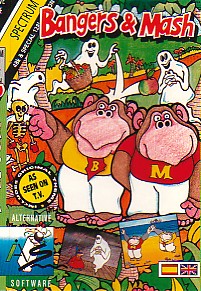 Bangers and Mash is a platform game that was developed by Bizarre Developments for Alternative Software and released on the Sinclair ZX Spectrum, Amstrad CPC and Commodore 64 in 1990; it is based on the FilmFair and Central Television series of the same name which aired on ITV from July to September of the previous year. Although the name suggests that two players can play the game simultaneously (as both Bangers and Mash), only one player can play alone as Bangers (the chimp with the yellow shirt and red tie) - and apparently, he has been naughty, so his Mum has kicked him out of the family house ("No. 3 Tree Street"). In order to make it up to her, he has to collect as many apples, pears and bananas as he can for a fruit pie she is going to prepare along with diamonds for bonus points, while watching out for hedgehogs, ladybirds, Venus flytraps, ghosts and the rat-witch Mrs. Snitchnose (as they'll kill him if they touch him); this game is also only comprised of two levels.