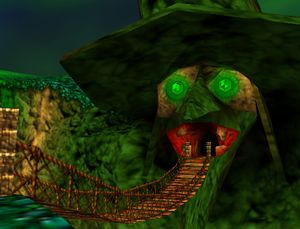 The entrance to Gruntilda's Lair.

Gruntilda's Lair is the hub that gives access to all other levels within the game.

The entrance contains a Jiggy in the rock formation to the left. Jump onto the rocks to retrieve it. After collecting it, head to the right passage to find the first area. There's a smaller area that has the first unfinished painting. Put the Jiggy into the painting to open the first level of the game. Now you can enter Mumbo's Mountain!

After clearing the area, and getting the jiggy located on the top of the mountain while still a termite, head out the area as you change back to your original bear and bird form. You can head up the second passage using the Talon Trot. There, beckons the Lair's first music door, Bottles will tell you about the many doors you will encounter in this game. If you have less than 50 notes, go back to Mumbo's Mountain and collect them. Otherwise stand next to the door and watch it disappear. Head inside and onto the second floor.

From here head right. Head down a passage to activate a violet magic cauldron by going near it. This serves as a shortcut between two locations. Between the room entrance and the Treasure Trove Cove painting is Brentilda. Find her in various locations throughout the lair and she will tell you her sister Grunty's disgusting secrets to save you from a "fiery death". Trust her on this one, and listen up.

Complete the Treasure Trove Cove painting before continuing. Head up the up/down staircases which leads to the entrance of the third floor.

Enter the pipe with water oozing out to head to an area. Jump out of the broken part of the pipe to reach an orange cauldron, activate it and it will be useful later in the game. In the water, there is a tunnel that leads to the painting for Click Clock Wood; however, this is unusable until very late in the game. On the land next to the water, head into a side area. At the end of the room filled with new enemies called Snippets is a huge treasure chest that should be opened if you completed the Treasure Trove Cove puzzle earlier. Flap-Jump inside to reach Treasure Trove Cove.

Return to the room where you solved the Treasure Trove Cove puzzle. From where you have entered, go left and you should see a Shock Spring Jump Pad. Use it to reach a platform with the Clanker's Cavern puzzle. Use 5 Jiggies to have access to the level while learning to place all Jiggies a the same time.

Head back up the steps, and enter the tunnel located above the pipe where the water is flowing in the previous room. Jump into the open pipe to enter the area.

From the entrance head right to drop onto a platform. There is a switch here. Use Kazooie's Beak Buster to activate it. Some platforms will rise across the sewer river. Jump across the platform and floating above the entrance to the third world is a Mumbo Token. Collect it, drop down, and enter Clanker's Cavern.

To the left of the entrance of Clanker's Cavern, there is a button on the ground. Use the beak buster on the button, then head to the raised platform and jump on the upper pipe. Speak with Brentilda, and continue along the pipe to open a grate within the water.

The grate leads to the painting of Bubble Gloop Swamp, which is unlocked by 7 Jiggys.

Return to the room from where you entered the pipe, and head up the ramp leading to the next floor. Open the door with at least 180 notes. In this next floor, head to the left and climb up the steep ramp. Bubble Gloop Swamp is just beyond the bridge.

You may notice the water around the swamp is hazardous. To walk within this area, you will need to learn a new move; once you do, you can visit the side tunnels to use the boots (or to speak with Brentilda.)

The picture for Freezeezy Peak is located in the path behind Bubble Gloop Swamp. The best way to reach it is to use the boots that allow you to walk within the swamp without taking damage.

After filling the picture with 8 jiggys and getting 260 notes, you can open the next door leading to the giant stone urn. Don't forget to collect the Jiggy (described below), and mumbo token behind the sarcophagi.

Head up the steps to the left, to reach an area containing various spider webs. Freezeezy Peak is located within a door to the right.

When you have 9 jiggies and 350 notes, walk to the face of the witch. You should arrive on a ledge within a volcano. Head up until you see the painting, and fill it in.

Head down two floors. Break a wall to the right of the staircase to get swamp boots; use these to cross the hot, burning sand.

Enter the valley when ready. Once done, visit Brentilda behind the valley, and return to Freezeezy Peak to collect the two jiggies in and near the world.

When you have 10 jiggies and 450 notes. Head to the floor conntaining Freezeezy Peak. To the right of the lower entrance to the floor, look for a ramp that brings you to an upper floor. From here, open the note door and go through. Swim through the water until you reach a dark cavern.

Jump onto the lower alcove, and use Flutter to go from alcove to alcove. When you reach the painting, you can return to the main area, and head into the volcanic area. Go into the exit just past the painting (the path further leads to Cheato and requires you to use pumpkin form).

To prepare Mad Monster Mansion and get all the jiggies, you need to smash the gate to the side.

You must smash the gate to the left of the entrance of Mad Monster Mansion. Then you must go to Mumbo's Hut and transform into a Pumpkin (be sure you have 20 Mumbo Tokens!), then you must exit Mad Monster Mansion and enter the church beyond the gate you had to knock down. Mumbo will be waiting for you here. Return to bear form, then open the coffin in the center of the room to find a switch. Use Beak Buster to activate it, which causes the water level to rise in the tunnel you were in earlier. Then, go to the room next to the Freezeezy Peak entrance. Go up the pathway that leads to the cauldron which is covered by a spider web. Along this path, there is a passageway which leads to Rusty Bucket Bay. Smash the "Rare" box, and then smash the button. This will raise the water level again. Swim across to the new passageway across the water. Once in the passageway, smash the metal gate on the right. This will lead you to the puzzle room, which opens the door to Rusty Bucket Bay.

In the room just before the room that leads to Rusty Bucket Bay, jump out of the water on the far side and jump up the platforms. There is a switch here that will temporarily raise the water level to its highest point. Quickly jump out of the alcove and turn right to find a 640 Note Door. Once it's opened, go through the hall with the "killer roots." Then, jump up the leaves on the tree stump and go all the way around until you can not go any further. This should lead to a puzzle piece switch. Stomp this and it should make a puzzle platform appear in front of the Click Clock Wood entrance puzzle that you might have discovered much earlier in the game. If you didn't, it is located in a room that can be found through a tunnel at the bottom of the waterfall near the entrance to Treasure Trove Cove. Go back through the "killer roots" hallway, and go to the far side to find the entrance.

Left of the entrance, there is a rock formation. Jump onto the top to retrieve the first Jiggy.

Within Conga's Jungle inside Mumbo's Mountain, climb the platforms along the wall and press the Grunty Pad with a Beak Buster. Leave the level as a Termite and climb up the mountain to reach the Jiggy.

Press the Grunty pad behind the lighthouse with a beak buster. The jiggy should fire from a cannon, and land on a place accessibly with a few high jumps.

Press the Grunty pad found near Clanker's blowhole. In the floor containing the painting to Treasure Trove Cove, smash the two eyes on Grunty's image and collect the jiggy.

Press the Grunty pad within the rock pillars. In the main area, the top of the Grunty's statue's hat will collapse. Once you get 260 notes, break a wall within the urn room opposite of Gobi's Valley and press button to reveal a shock jump pad. Use the pad to jump into the urn and fall to get the jiggy.

Press the Grunty pad under one of the killer snowmen. Once you have 350 notes and learned how to use Turbo Trainers from Gobi's Valley, and removed the two webs with eggs, use the shock jump to reach the button containing feathers. Press the button, wear the trainers, and bolt to the flight pad in the middle area. Fly up and through a hole in the upper wall to collect the jiggy.

Grunty's Pad is located in the right-hand half of King Sandybutt's maze. The Jiggy will be available in the large sarcophagus.

The Gruntilda pad is located in the church. You can reach it by jumping to the sconce on the left and flying to the top of the room. It creates a jiggy in the eye of Gruntilda's face. To get to it take the ramp to the blue cauldron and jump onto Gruntilda's hat. Go to the brim of it and flap Kazooie's wings to land on her nose, peck the glass eye to break it and get to the jiggy.

On top of the back of the boat, climb the boxes first then jump onto the TNT crate, climb to the top of the cranes rope and jump for it.

On Winter in front of the snowman about halfway up the tree trunk. Puts a jiggy in the tree outside the world, use Mumbo in Spring to turn you into a bee to get it.

Throughout Gruntilda's lair, there are magic cauldrons that allow for quick transport from one location to another. To open a path between them, you need to find both cauldrons of a given colour.

Brentilda will give information about Grunty. At each location you see her, she will give three pieces of information. She may also restore health as well.

The information she gives changes from game to game.