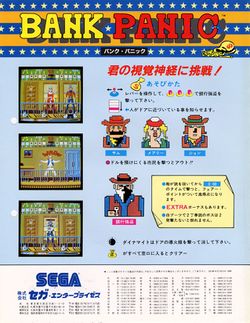 Bank Panic is a first-person shooter arcade game that was developed by Sanritsu for Sega in 1984, and licensed to Bally Midway for U.S. manufacture and distribution; it utilizes a Zilog Z80 (running at 3.86712 MHz), with three Texas Instruments SN-76496s (running at the same speed) for audio. The player must utilize a two-way joystick to take control of a teller, at a bank in the American Wild West, with three buttons to make him fire bullets at the left, central, and right doors in front of him - and the bank has a total of twelve doors (but only three will be visible on the screen at a time), so the player will have to push the joystick left or right to see the other nine. When the doors open they will reveal either a dangerous bandit or an innocent citizen; the bandits must be shot before they can shoot the teller, while you must let the citizens deposit their money (and if you inadvertently kill one, it will cost you a life). The doors will only open while they are visible on the screen, and a round is only cleared after all the innocent citizens have deposited their money into the bank - and the indicator at the top of that screen will show the impending approaches of the bandits and innocent citizens (the latter of which are indicated by a dollar sign). Time bombs will also occasionally appear on the doors (which are indicated by the cuckoo-clock-style timer at the top of the screen counting down from 60); if you cannot shoot them before the timer runs out they will again cost you a life. In addition to the bandits and citizens, cowboys will also occasionally arrive at the bank, holding gifts over their heads, which can be shot for extra points - and some of the citizens will also arrive at the bank after being tied up with ropes, and the teller must carefully shoot their ropes to free them (without shooting the citizens themselves). After the clearing of a round, you will receive bonus points, for the amount of time you have remaining, and the amount of money bags deposited into the bank by those innocent citizens.