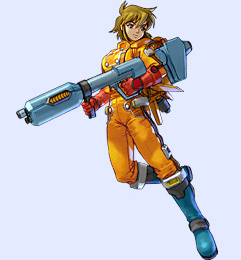 Namco's 1985 scrolling shooter arcade game of Baraduke (which is also known as Alien Sector), is divided into eight worlds, each one made up of six floors, for a total of forty-eight stages.

The first player controls "Kissy", while the second player controls "Takky"; as mentioned upon the Getting Started page. The fact that they're differently named means it can be speculated that this was to be the first game from the company to allow two players to play simultaneously. However, that honour would later go to Sky Kid, at the end of 1985 - which also runs on Namco's Pac-Land hardware (and was the last game to do so).

Both characters start the game with two shields, and have the chance to earn up to six more by saving the one-eyed Paccets (that can be found inside the capsules that the Octy leave behind when killed) for the end-of-floor bonus games. If one of the characters has at least one Paccet after going down the pipe at the bottom of a floor, an end-of-floor bonus game will be invoked after receiving a shield bonus (100 points for every shield they have remaining).

In the end-of-floor bonus games, a red square will move rapidly around a virtualized octagon on the left side of the screen in a clockwise direction while the text "PUSH FIRING BUTTON" is flashing up on the right; once you have pressed the Firing Button, the red square will slow down and stop. If it has landed on a Paccet (

), you will receive one extra shield - however, if it has landed on a letter "N" (

), nothing will happen to you. But if it has landed on an Octy (

), you will lose one shield, unless you only have the minimum amount of two; so you should not let this happen by any means. Therefore, the only guaranteed way to get an extra shield in end-of-floor bonus games is to have eight Paccets in your possession - remember that now.