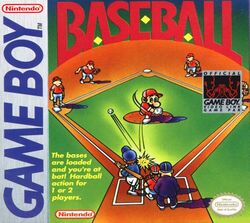 Baseball is a baseball game developed by Intelligent Systems and published by Nintendo in 1989. It was one of four launch titles for the Game Boy. The other launch titles were Alleyway, Super Mario Land, and Yakuman (only in Japan). While the game appears to be modelled after the NES / Famicom Disk System version of Baseball released in 1983, the influence of Namco's popular baseball series Famista can clearly be seen. Two player play can be achieved by linking two Game Boys together.

Mario and Luigi are team captains; Mario is the captain of the Bears and Luigi is the captain of the Eagles. The player can select them as their pitcher if they wanted, but graphically all the pitchers look the same. The rest of the team pitchers have common English names, such as "Paul", "Randy", "Sam", and "Jimmy." During this era, Nintendo would often include Mario in games just for appearances' sake to help sell the game, though often it wasn't really possible to control Mario in many of these games. Other examples of this is Mario is the referee in Tennis and the paddle in Alleyway.

Players can choose between a USA mode and a JPN mode, which dictates the way ball speed is indicated, the display order of the ball count, and the background music played. There are only two teams, the Bears and the Eagles, and they can't be modified. The Bears are always up at bat first. While defense in the NES version of Baseball was automatic, the Game Boy version gives you the option to control players in the field. If you press nothing, the computer will direct the players, although it doesn't always make the best choices.