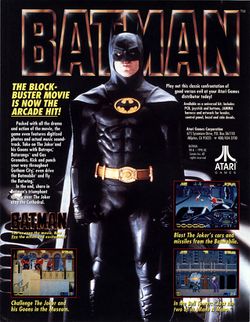 Batman is a beat 'em up/first-person shooter arcade game that got released by Atari Games in 1990; it utilises a Motorola 68000 running at 14.31818 MHz, and a Motorola M6502 running at 1.7895 MHz, with Yamaha YM-2151 running at 3.579 MHz for music and an OKI MSM-6295 running at 9.037 KHz for effects and speech. It's the fourth title in the Batman series and an inceptive arcade outing for the "Caped Crusader" (although he had previously appeared hiding in oil drums for Konami's Manhattan 24 Bunsho in 1986) - and because it's based on Tim Burton's 1989 film it features stills and dialogue from it between, and during, stages (including the Joker's The pen, is truly mightier than the sword!).

The player must use a 4-way joystick to take control of Michael Keaton's version of Batman, with two buttons (the first to make him attack the enemies, and the second to make him jump); along the way, he can collect Bat-Symbols for extra energy, along with Batarangs, Batropes, and Gas Grenades to use against the Joker and his men (but if he is killed, he does not lose any remaining instances of his current weapon he may have had when resurrected, which comes in useful for Gas Grenades!). Batman would later return to the arcades for Acclaim's Batman Forever: The Arcade Game in 1996.

Based on movies:
Based on cartoons:
Spin-offs:
Sub-series:
Retrieved from "https://strategywiki.org/w/index.php?title=Batman_(Arcade)&oldid=988896"
Categories: