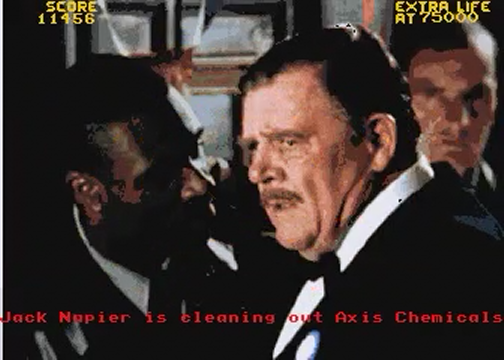 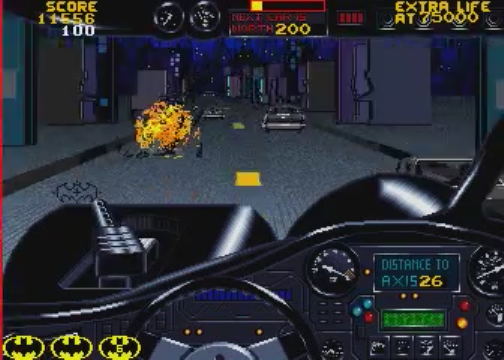 Once the Batmobile's crosshair cursor has materialized in the centre of the screen, you shall have to use the joystick in order to direct the cursor around the screen, and the Attack Button to make the Batmobile fire shots at the Grissom gang's black cars (as mentioned on the Getting Started page, the red and blue cars are indestructible and the Batmobile's shots will bounce off them); the first Grissom car destroyed is worth 100 points, while the second is worth 200, and so on, up to the tenth being worth 1000 (however, if you fail to destroy one before passing it, their value will be reset back to 100). If you managed to destroy all the Grissom cars on this stage, the text of "5000 POINT BONUS FOR GETTING ALL THE GRISSOM CARS" will appear on the screen just before the Batmobile arrives at Axis Chemicals, and you receive the bonus (even if you fail to destroy one after it appears) - and once it has arrived at Axis Chemicals, Batman shall proceed to the third stage, where he must find the gangster Jack Napier and force him into a vat of toxic waste.

Note: If the Batmobile is hit by one of the bombs dropped by a Grissom car when Batman is down to the last hit of his last life, it will cost him the game.