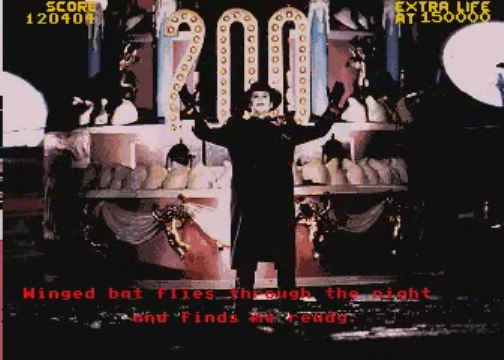 Joker:
Wing-ed bat flies through the night and finds me ready. 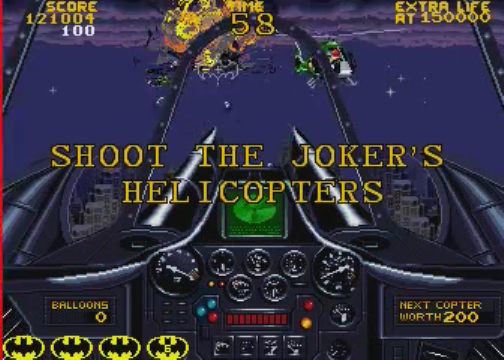 Once the Batwing's crosshair cursor has appeared on the screen, you will have to use the joystick to direct it around the screen and the Attack Button to make it fire off shots at the Joker's helicopters (and the missiles they launch at it); the missiles are worth 500 points each but the helicopters themselves are worth the same as the (destructible) cars on the second and fifth stages (100 for the first helicopter destroyed, 200 for the second and so forth up to 1000 for the tenth). If you miss a helicopter (this only applies when they are flying towards the Batwing, rather than only flying past it in the background), or get hit by a missile fired from one, their point value will reset back to 100 (in the case of the latter, the text "AVOID MISSILES FROM HELICOPTERS" will appear on the screen) - and when the first balloon of the stage comes into view (they are either in the form of gargoyles or clowns), the text "CATCH THE BALLOONS AT THE FRONT OF THE BATWING" shall appear on the screen (you shall also receive 2000 points for each balloon you catch). Once you have caught four balloons the Joker shall shout Why didn't somebody tell me that he had one of those things??? from the MSM-6295 (off-screen); if you manage to catch all the balloons on the stage, the text "10000 POINT BONUS FOR NOT MISSING ANY BALLOONS" shall appear upon the screen just before the Batwing arrives at Gotham City Cathedral and you receive the bonus (even if you should miss a further balloon after this point). Once the timer has run out and the Batwing arrives at Gotham Cathedral, the Joker shall shout He stole my balloons!!! from the MSM-6295 (again, off-screen), as four stills of him firing his gun at the Batwing, the Batwing falling out of the sky, Batman emerging from the wreckage and Gotham Cathedral fade in and out in turn - and Batman shall then proceed to the eighth and final stage, where he has to force the Joker off the Cathedral's roof to defeat him for good.

Note: If the Batwing is hit by a missile fired by one of the Joker's helicopters when Batman is down to the last hit of his last life, it will cost him the game.