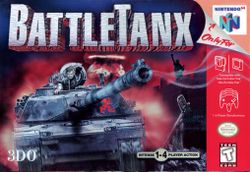 BattleTanx is an action game for the Nintendo 64, developed and produced by 3DO. The game is followed by a sequel titled BattleTanx: Global Assault.

There are three tanks in the game for the player to choose from. The player can choose between a Moto Tank, M1A1 Abrams MBT, or the Goliath. There are 17 levels to complete in order to finish the single player game, all of which are filled with enemy tanks. Each level is located in a specific place in the United States, such as New York City, Chicago, Las Vegas, and San Francisco the game features most environments destructible as well as interactive in some cases.

In the game's multiplayer mode, players can battle with up to 4 players simultaneously. There are four different multiplayer configurations; Battlelord mode (equivalent to capture the flag), Deathmatch, Family Mode, and Annihilation.