Avoid being cheap-shot by the enemy[edit]

Use bricks and steel walls to your advantage[edit] 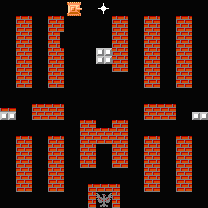 There is very little need of a walkthrough for Battle City. You progress through each stage one at a time (and you can choose what stage you start out on in some versions.) In each stage, there are 20 tanks in total you must defeat in order to advance to the next stage. The thing to do immediately when you begin each stage, is to analyze what avenues of approach exist for the enemy to attack your base from, and where you can find shelter for your own tank and attack from. Other than that, keep your eye out for red flashing tanks and collect the power-ups they leave behind as soon as possible.

When the stage 35 has been completed, every stage is repeated again. After completing 70th stage, the game will reset back to stage 1 with everything (except your tank power and score).

Difficulty of defending the base with not upgraded tank:

When stages start to repeat again, tank pattern in each level (36-70) is same as 35th stage. Enemy tank spawning speed is also increased.