Don't let his age fool you, Bromswell was an adventurer in his day, and a wizened master of the arcane arts. While technically retired, he's still willing to lend his skill to a worthy cause. 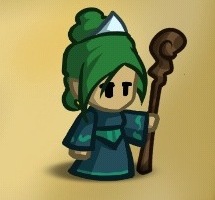 Thistle has a slightly higher attack statistic than Bromswell, but has about 20% less health.

Using Blizzard to slow enemies down is an excellent way to keep your wizard safe from harm, and allows you to kite enemies around the field, having other characters damage them while your wizard leads them on a chase. When you gain Teleport at Level 25, this becomes even easier. Consider keeping both Bromswell and Thistle in your party and alternating their Blizzard spells to keep enemies slowed almost all the time. Once they both have teleport, some battles can even be won using these two characters alone.