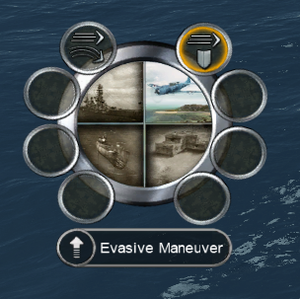 Naval Supplies are advantages a team can use to temporarily or permanently boost the effectiveness of their ships, aircraft, submarines, or bases. They are roughly equivalent to Support Powers or General Powers from the Command and Conquer games.

Naval Supplies can be activated by pressing the Naval Supply key to open the Naval Supply Manager. This manager is very similar to the Support Manager used to create units. It is best to use this in conjunction with the tactical map, as this can allow you to choose targets for naval supplies much quicker.

Supplies are obtained through one of two methods: in campaigns, naval supplies are achieved by accomplishing secondary and hidden objectives. It is rarely necessary to use them, although they can prove extremely useful in some cases - especially when you're looking for enemy units in a large map. In multiplayer supplies originate from neutral bases that can be captured. Most naval supplies are one-shot deals, but some provide persistent bonuses.

In multiplayer games it is possible to apply Naval Supplies to units that are not under your direct command (units created by other players in island capture). When not actively in battle, try to make use of what naval supplies you have to help your allies.

Naval Supplies come in three flavours, and they are listed below.

A couple B-17s can wake up the home defenders of a base. Similar attacks can be applied to any target, anywhere - of course, try not to use depth charges against ships.

Also known as "reinforcement powers", air support powers summon a squadron of attack aircraft to strike a target with specified weapons. These units are not controllable by the player, and can sometimes be shot down. However, their greatest asset is their ability to strike from a border, allowing them to strike at odd angles that are beyond the reach of standard air defences.

Summoned units will fly offscreen after their attack is complete. 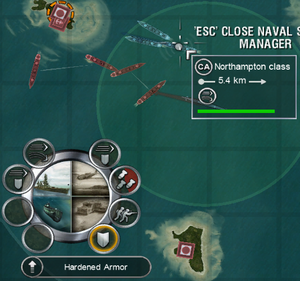 Toughen up your ship's defences with some additional armour.

Active powers act as temporary boosts to your units' effectiveness.