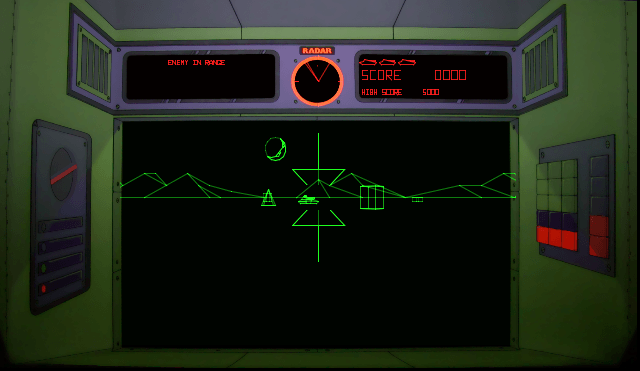 Once you have inserted a coin into the cabinet of Atari's 1980 first-person shooter arcade game Battlezone then pressed the Start Button (the positions of the solids are randomly-generated so it is never the same game twice), you shall see a Slow Tank in front of your own; the text "ENEMY IN RANGE" shall be displayed in the top-left corner of the screen with the text "ENEMY TO LEFT/RIGHT/REAR" (the last word is based on the Slow Tank's current position) below it. The Slow Tank will also be indicated by a dot on the radar display at the top of the screen - and if it is in your line of fire (indicated by the area at the top of that radar display), you must try to line up your gunsight with it, and fire a bullet at it before it detects you and has a chance to fire back (because you can only fire one bullet at a time, you will have to wait until a missed one has disappeared or hit a solid before you can try again). If the bullet hits the Slow Tank it will be blown up; a few seconds later, another one will appear elsewhere in the war zone. Occasionally, a Flying Saucer will appear (signified by a "hovering" sound); however, it will not fire at your tank, or show up on that radar display (but can serve as a distraction if one appears at the same time as an enemy tank). If you take too long over killing an enemy tank, it will disappear and a Missile will drop out of the sky and roll towards your tank (surmounting any solids in its way, so you cannot hide behind a cube or pyramid like you can with a tank!) while humming (even when you have not yet reached the point value where they are first due to appear) - and you will either have to kill it or avoid it (because it will kill your tank if it crashes into it!). Depending on how the cabinet is set, the value where Missiles are first due to appear can be 10000, 20000, or 30000 points; once you have reached 30000 points (regardless of when the Missiles have been set to first appear), Super Tanks (which move faster) will supersede Slow Tanks but you can still hide behind a cube or pyramid (causing the text "MOTION BLOCKED BY OBJECT" to appear in the top-left corner of the screen as a beeping sound is heard) so that their shots cannot hit you. The game will continue in this way until you reach 999000 points (because the game does not have an ending, this is the closest you can get to winning!) or lose your last life - and if your score is over 5000 points (the preset high score), the game shall go into "high-score" mode as the opening bars of the 1812 Overture by Pyotr Ilyich Tchaikovsky (1840-1893) and an explosion are heard. You must then push the left joystick up and down to select your initials (up to three characters) and press the button on the right joystick to confirm them; once you have done so, the game will go back into attract mode (if your score was over 100000 points, a tank symbol will be displayed next to your initials on the high-score table, even if it is not the highest of the day). This game would also later be remade as Bradley Trainer in 1981.