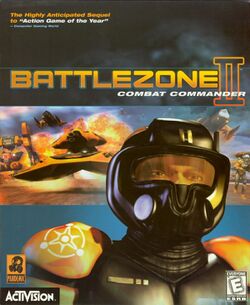 Battlezone II: Combat Commander, often abbreviated to BZII and BZ2, is a first-person shooter and real-time strategy game which was developed by Pandemic Studios for Activision and released on the Microsoft Windows operating system on December 31, 1999; it is the 4th title in the Battlezone series, and much like its immediate predecessor which was released the previous year, it's a hybrid of a tank simulation, a first-person shooter and a real-time strategy game. The player's object is to pilot various futuristic vehicles (while using the function keys to select and command units and structures), and the game also features two races - the International Space Defense Force (humans) and Scions (aliens).

This is taken from the back of the game cover, the front of which is displayed in the image to the right:

You are the
Commander.
Once archenemies, the U.S. and Russia
have abandoned their space race in the face
of a greater common threat: impending alien
attack. Uniting to form the elite International
Space Defense Force, these world powers
have recruited you to lead a planet-to-planet
drive to crush the alien invasion...before total
devastation is unleashed on the human race.
The solar system is at war. Take command.
© Activision Inc. 1999