Bejeweled is the flagship product of PopCap Games released in 2001. It was the first game in the series of puzzle games, and influenced the creation of many other match-3 variations. It featured a simple interface, where users click on vertically or horizontally adjacent tiles to swap two gems.

Bejeweled was influenced by the game Shariki, which used similar mechanics. 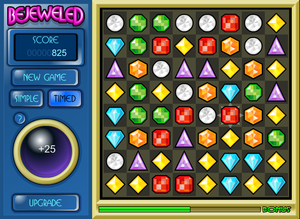 Gems of seven different colors are placed within an 8×8 grid. The player must then select two adjacent gems to swap their positions, causing at least one of the formations to create at least three identical gems in a row. Invalid moves that do not create matches cause the gems to return to their original position.

When a match occurs, the gems are destroyed causing gems directly above the removed gems to fall down. Any gems that fall into a 3-in-a-row formation are also removed, with additional points being scored

When you fill the bar at the bottom of the screen, you will receive a bonus; 10 random gems are removed. The game will become slightly more difficult, whether by providing more difficult gems, or by speeding up the timer.

There are two gameplay modes:

Simple
The objective is to score as many points as possible. The game ends when there are no moves remaining.
Timed
As with simple, you need to score as many points as possible. However, there is a timer bar at the bottom that quickly decreases. The game ends when the timer runs out; if there are no available moves, the board is cleared and new gems are placed.

The safest option is to clear gems at the top of the grid, and work downwards. This reserves known matches for the future, when moves become sparse.

Eventually, you will have to create matches at the bottom. This provides a greater chance of high-scoring cascades, but can also disrupt potential matches in the rows above.