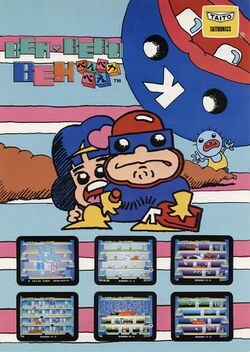 Ben Bero Beh (べんべろべえ, lit. Ben Bero Bē) is a platform arcade game that was released by Taito Corporation in 1984, only in Japan; it runs on its own dedicated hardware (a Motorola M6809 running at 1 MHz and a Zilog Z80 running at 3 MHz, with a quartet of General Instrument AY-3-8910s running at 1.5 MHz for audio). The player has to use an 8-way joystick to take control of the eponymous "Ben Bero Beh" (a fire-extinguisher-wielding superhero), with two buttons to make him spray foam from his extinguisher and jump - and he has to make his way from the top of each burning apartment complex to the bottom while watching for gaseous explosions, collapsing floors, defective lighting fixtures, and several enemies (including the Enemy Agents from Elevator Action, and Chack'N from Chack'N Pop) which emerge from the apartments, with an ultimate intention of putting out the flames and saving his girlfriend "Nao-Chan". In 2007, this game was included in the Japan-only compilation Taito Memories II Jōkan for the Sony PlayStation 2; thirteen years later, on October 1, 2020, it was also ported to the Nintendo Switch and Sony PlayStation 4, as a part of Hamster Corporation's Arcade Archives series.