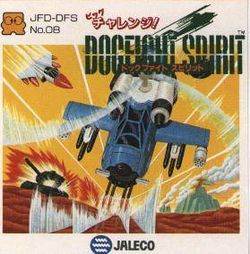 The game's power-ups, available by destroying smaller supply trucks driving across the screen, change the helicopter's weapons but do not make them stronger. It's even possible to collect the weaker original weapon again if the player is too careless. These range from a stronger forward-firing cannon (or laser) to guns that spread fire forwards and to the sides of the helicopter.