From StrategyWiki, the video game walkthrough and strategy guide wiki
(Redirected from Bionicle Heroes)
Jump to navigation Jump to search 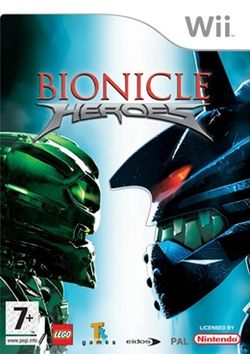 BIONICLE Heroes is a 3D third-person shooter genre, based on Lego popular Bionicle franchise. It was released in November 2006 by TT Games on all then-current console systems (PlayStation 2, Xbox 360, and Nintendo GameCube), PC, and Nintendo's handhelds (Game Boy Advance and Nintendo DS); a Nintendo Wii version was later released in April 2007. The game stars Bionicle's 2006 feature characters, the Toa Inika and the Piraka.