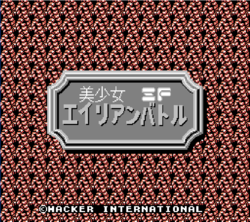 Bishoujo SF Alien Battle is an unlicensed Family Computer Disk System video poker game, made by Hacker International in 1990. The game features two disks, one with the game on it, and one containing the reward picture for beating the game. You play as a young Japanese schoolgirl, who must defeat an alien super-mind in video poker to just be raped by its tentacle-waving henchman, instead of brutally murdered. 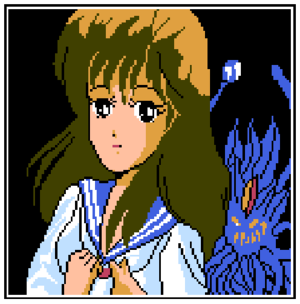 Before the game starts, you are kidnapped by an alien.

The game is very simple; you are dealt five cards, and must try to build the best hand according to traditional poker hand rankings. Better hands are worth more points, and you are also rewarded by drawing fewer cards. The goal of the game is to score 5,000 points. The game is over when you lose 1,000 points, at which time the game is reset and you start anew with zero points. As the game progresses, you are raped harder and harder, with scenes depicted at each 1,000 point mark. When you win the game, rather than being released from your torment, you begin to enjoy your humiliating predicament and become an alien sex-slave. 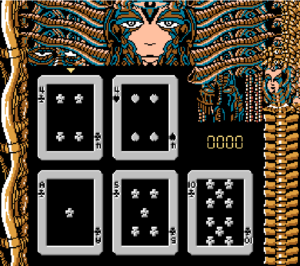 The game is impossible to lose if you never draw any cards. Due to the multiplier system, you can take zero points on bad hands and at least 100 points on even the worst of the good hands. For bad hands, in which you can't even make a pair, you will lose 100 points. This number is multiplied by how many cards you draw, up to five. So if you draw no cards, it is multiplied by zero, giving zero total added to your score.

Once you are dealt something to your hand, it still doesn't pay to draw to a better hand, because there is a greater chance of not making the hand. The multiplier for winning hands is inverted, so you get a bigger multiplier for drawing less cards:

Note: The pictures contain explicit graphics that may not be suitable for children.

You get a new picture at every 1,000 points accumulated. After the fifth picture, you can insert the second disk for the final one.