Throughout the game, Black Tiger will discover a variety of items that will help him survive his journey to defeat the three dragons. Items appear in a variety of ways. Some are sitting out in the open, just waiting to be collected. Others drop from defeated enemies. But a good number of them are waiting to be found by cracking open pots (shown to the right.) Pots must be struck in order to break them, and then their contents are revealed. While items that drop from defeated enemies will disappear if they remain uncollected after a short period of time, items contained within pots will stay present no matter how much time passes, so there is no rush to collect them. However, be aware that some pots may be hiding enemies inside. Don't rush into collect until you are sure what has appeared is safe.

Another item that you can obatin is the POW item. It is not hidden in a pot or a chest, but rather in plain sight at strategic points along each stage. Collecting a POW will instantly annihilate any enemy present on the screen. If you become surrounded by enemies and a POW is close by, grab it as quickly as possible to eliminate the threat around you. Then pick up all the treasure that the enemies leave behind. 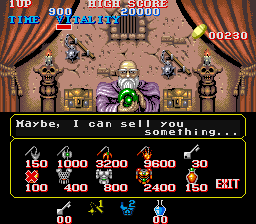 As you explore each stage, you will encounter a large number of captives who have been frozen and turned to stone. You can restore them to full health simply by touching them. Once rescued, they often repay your kindness in one form or another. They may offer you some Zenny, increase the amount of time you have remaining, restore some of your vitality, or offer you some advice. Some captives have nothing to offer you but their gratitude. However, a good number of them actually run shops, and are happy to repay you by offering to sell you goods. Each shop has four different weapons and four different armors for sale, along with keys and antidotes. The keys can be used to open chests, as explained above. The antidotes can be held onto in case you become ensnared by a poisonous plant. If you possess an antidote, you will automatically consume it and remain unpoisoned.

The price for keys and antidotes are fixed, but the price per weapon and armor changes according to the difficulty level set by the arcade operation, and the region of the game (International or Japan). The following chart explains the cost per item for each level and region.

Secret items can only be found by destroying certain sections of wall where they are hidden, and revealing them. These items have a wide variety of effects.