If the difficulty is low enough, there's a good possibility that you can afford to purchase the Level 5 weapon in the beginning of the stage, or at some other point later on. Once you do, you can switch your shopping habits to always buying the best armor you can afford, keeping at least 6 keys on hand, and buying extra antidotes just in case.

(A): The stage starts out easy enough, but around this point, many enemies begin to appear at once. Enemies will appear from pots, including a few Fire Demons, and a Red Arremer appears before the first major jump. All the while, skeletons will rise from the ground. Clear out all of the enemies before you continue on and make any more appear.

(B): Watch out for a combination of witches teleporting onto the screen, and boulders falling from the sky. Try not to advance until the witches are removed, and then watch out for more boulders dropping down. 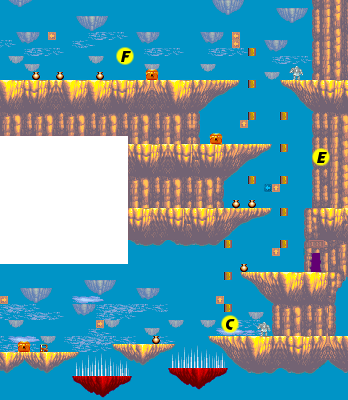 (C): Watch out for a plant that rises out of the ground just before you reach the next captive. This captive has a shop. Hopefully by now you have acquired enough Zenny to purchase the strongest weapon. If not, buy some low level protective gear instead. When you climb up from here, you'll encounter your first red witch. They take more hits than the normal purple witches, and they cast spells that confuse you. Continue climbing up to the next platform to enter the dungeon.

(D): As soon as you enter the dungeon, turn around and strike the left wall to reveal a hidden star. Collect it to increase your armor strength by 3 levels. The proceed through the dungeon. There aren't a lot of enemies to deal with in here until the very end. Most of the difficulty comes from the extended jumps over spikes that you must perform. Remember to push the joystick up as you jump to increase your leap distance.

(E): Above the dungeon entrance, there's another opportunity to discover a hidden item. Strike the right wall as you climb up to the top. Almost even with a platform on the left, you will find a cow hidden in the wall. Break the wall above it as well to have easier access to it. Cows give you 1000 Zenny.

(F): Watch out for the no less than three boulders which fall from the sky as you make your way to the left across this long platform. They will continue to appear all the way up to the area nearly filled with Spinning Skull Coins. To traverse this area, you must very carefully leap over the lowest coins without hitting your head on the coin above. And no, the POW will not work on them.

(G): The arrows here may give you the false impression that you can jump up here and shortcut the entire stage, but it isn't true. You are forced to continue on the left in order to find the path which leads to the top platforms and on to the boss. However, before you climb up, head all the way to the left first.

(H): There is one more secret to discover in this stage. Collect the POW to eliminate the Fire Demons and Orc surrounding the captive, and then rescue him. Strike the wall behind him to reveal some bamboo, which increases your remaining time by 30 seconds. From here, you can return to the right and climb up. Unfortunately, a snake positioned on the highest pillar means you will inevitably be struck by him and get poisoned. Make sure you have some antidote. 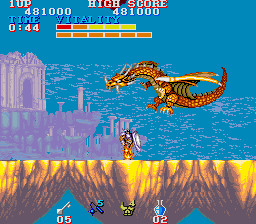 The Red Dragon isn't very different from his weaker blue cousin. He flies around the screen in the same manner. He has twice as much health, and he can spit out two fireballs at a time as opposed to one. Both, however, can be stopped by your weapon. He may cause eruptions to appear along the ground. Hopefully you are well armored and can withstand getting struck a few times, as you will likely have to walk beneath him and head back in the opposite direction in order to get some space between you so that you can attack and defend yourself with more efficiency. The more you can target his head with your chain whip, the faster he seems to go down.